China News Service, Bollinger, November 10 (Reporter De Yongjian) On the occasion of the 100th anniversary of the end of the First World War, Belgium, the main battlefield of World War I, held an event on the 10th to pay homage to This is China’s first war Chinese workers.

On the same day, in the First World War Memorial Park in Poplinger, West Flanders, Belgium, China’s new ambassador to Belgium, Cao Zhongming and Poplinger’s Mayor Dejay, presented to the Chinese Workers’ Statue Wreaths, the delegation of the Overseas Chinese Affairs of Shandong Province, representing the hometown of Chinese workers in World War I, also attended the event. 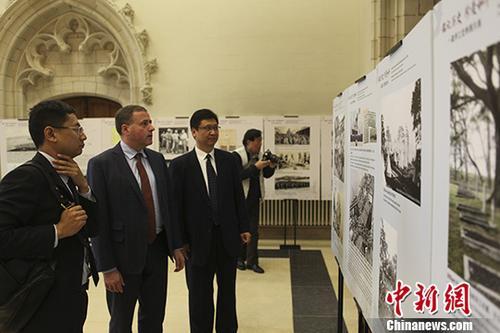 Local Time November On the 9th, on the occasion of the 100th anniversary of the end of the First World War, a photo exhibition was held in Bruges, the capital of West Flanders, Belgium, bearing in mind the Chinese workers who had been forgotten for a long time and witnessed the true history of Chinese workers. The picture shows the Chinese Embassy in the Embassy of Belgium, Zhang Chi (first from left), the Mayor of Poplinge, West Flanders, Dejay (middle), and the deputy director of the Foreign Affairs Office of the Shandong Provincial Government, Wu Guan (right). China News Service reporter De Yongjian photo